The calibration of fesob in the USA region does not reach the target, even after many iterations: 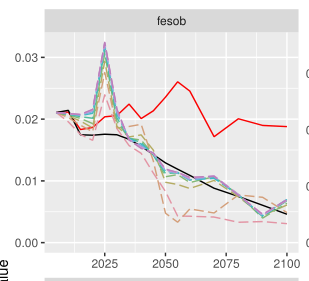 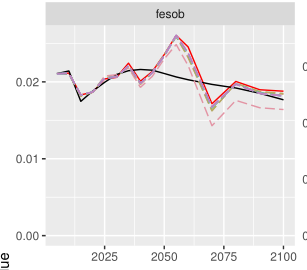 Behind the quantities, the prices of fesob show great variations, with sudden price drops or increases from one period to another.

In the calibration routine, the strong and sudden variations of prices are smoothed. This normally does not cause a problem, but if prices vary strongly, the difference between smoothed and original prices becomes important. Therefore the computed efficiencies (which make target quantities optimal at the smoothed prices) will not adapt so as to make the output quantities close to the target quantities (because smoothed prices are too far away from output prices). Removing the smoothing would help for fesos USA, but it would cause problems elsewhere. The real problem lies in the strong and sudden variations of prices, which I could not solve.

Solids, and especially solids in buildings, are one of the most problematic energy carriers in the calibration, because there are many equations and fixings which constrain their development, and prices. I list some of the constraints and equations I played around with in the following. Unfortunately, this has not helped solving the price issue for fesob/i USA so far. Prices of fesob and fesoi should normally be equal. There are several reasons why it need not be the case.

In addition, I have tried to fix fesob and fesoi to their 2025 target quantity: the idea is to provoke an infeasibility that could point to the original problem (for early periods it is usually related to capacities). There was no infeasibility.

Instead of looking directly for the source of the problem, another option to solve the calibration issue could be track back from which version on the problem occurs. This would require making a calibration of several versions of the model. But this option is a rather expensive way of solving the issue, and it could probably only work if the problem arises from a significant change and not from an accumulation of small changes.